The Comprehensive Guide on Branches of Mathematics

Mathematics is an essential component of human logic and reasoning, as well as efforts to comprehend the universe and ourselves. Mathematics is a great way to develop mental discipline while still encouraging logical thinking and analytical rigor. Furthermore, knowing the contents of other school subjects such as physics, social sciences, and even music and art is dependent on mathematical knowledge. To help in the advancement of cutting-edge computing technologies, mathematics is now taught at all ages, from elementary to advanced. As a consequence, students can obtain clarification from a variety of mathematical disciplines. If you need assistance, visit our Geometry homework help page, where our experts will gladly assist you. 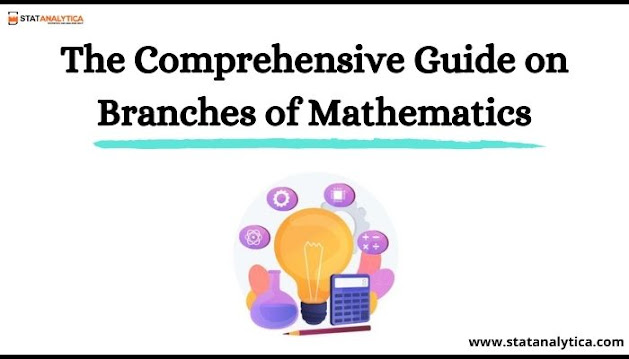 A Comprehensive Guide on Branches of Mathematics

Algebra, number theory, geometry, and arithmetic are the four major fields of mathematics. Many branches have been uncovered as a result of these branches. The study of mathematics was somewhat small prior to the modern era. However, mathematics has evolved into a large and complex subject over time. Mathematical advancements continue to make significant contributions to the world of science. As a result, it is known as the Queen of Science.

The following branches of mathematics can be roughly classified:

Arithmetics: One of the various branches of mathematics, arithmetic is the oldest and most fundamental. It is concerned with numbers and their simple operations, such as addition, subtraction, multiplication, and division.

Algebra: This is a type of algebra in which we combine numbers with unknown quantities. The letters of the English alphabet, such as X, Y, A, B, and so on, or symbols, are used to describe these undefined numbers. Letters aid in the generalization of formulas and laws, as well as the identification of undefined incomplete values in algebraic expressions and equations.

The notions of category and functor, which arose from so-called homological algebra, are two essential abstractions recently introduced in algebra. Algebra also includes arithmetic and number theory, which deal with peculiar properties of integers such as unique factorization, primes, equations with integer coefficients (Diophantine equations), and congruences. Analytic number theory, on the other hand, uses nonalgebraic computation approaches to solve those problems.

Geometry: Is the most realistic branch of mathematics that deals with the forms, proportions, and properties of numbers. Points, shapes, angles, plates, and solids are the fundamental elements of geometry. Geometry deals with the form, scale, and other characteristics of figures, as well as the nature of space. The axiomatic analysis of polygons, conic parts, triangles, polyhedra, and related geometric objects in two and three dimensions—in particular, the relations of congruence and resemblance between such objects—is the subject of Euclidean geometry.

Trigonometry: This is the analysis of relationships between angles and sides of triangles. It is derived from two Greek words, trigon (means triangle) and metron (means measurement). Trigonometry, a branch of mathematics, deals with higher-order concepts. It is made up of two Greek words: Perignon (meaning triangle) and metron (meaning metron) (meaning a measure). It's how we work out how the angles and sides of a triangle are related. To put it another way, it is inextricably linked to geometry.

Analysis: This is the field of mathematics that studies the rate of change in various quantities. Calculus is the foundation of analysis. The use of infinite processes, which include passage to a limit, is a necessary component of the analysis. For example, as the number of sides of the polygons increases forever, the area of a circle can be calculated as the limiting value of the areas of inscribed regular polygons. Calculus is the most fundamental branch of analysis. The integral calculus arises from the general problem of approximating polygonal figures to measure distances, regions, amounts, and other quantities as boundaries.

Math can be found anywhere and at any moment. So, what are you waiting for? To get a good grip on these basic mathematics branches, start applying them. Go to our Geometry Assignment help page if you need assistance with geometry.

Popular posts from this blog

Top Most Skills Required To Be A Successful Business Analyst

Top 8 Must Have Skills For Data Analyst

January 17, 2019
Data Analyst is one of the most responsible jobs in the industry. It is also considered top-paying jobs in the world. But becoming a data analyst is not that easy. Data analysts should have some essential skills that are required for their careers. Let's look at the top 8 major skills that each digital analyst should have. 1. Programming Skills They should have excellent statistical skills, in addition to the statistical skills they must have some programming skills too. The programming skills include commands on Python, MATLAB, R etc. and includes commands on the SAS and SPSS in statistics skills. Also, they can have commands on big data tools, i.e. spark, Hive Echakayuel. Unlike more skills, they have a higher likelihood of being the best data analyst for them. 2.Analytical Skills After keeping an eye on statistically as well as programming skills, it's time to keep an eye on the analytical skills for the Data Analyzer. They should have a fine command on Google Ana
120 comments
Read more

December 29, 2018
Statistics Research Projects A Statistical research project is a process of answering a research question and presenting the work in a written report by using statistical techniques. The type of question the researcher asks will help to determine the type of analysis that needs to be conducted. It is also important to consider what specific variables need to be assessed when writing a research question. Purpose of statistics projects The main purpose of statistics reports is to educate readers on a specific project or subject matter. It is possible only by following proper guidelines of the paper. Following proper formatting rules and includes all relevant information, facts that anyone reading the report might want to know. How to select good topics for statistics projects? In statistical projects involves a student answering a complex research question, while using statistical techniques to support their findings. The findings or conclusion are presented in a co
98 comments
Read more